Last year my engine light came on so I went to a local repair shop to check on my vehicle. They claimed they had fixed it after I paid $900. But after returning back to them three times it was still not fixed. Then I took it to a dealership. They claimed to have fixed it also, but after two hours the light came back on. So I took it to an auto parts store to read the code and it was the same code. Then they decided on a new fix for $1500. It didn’t make sense to me, but I trusted them.

I got it back and three hours later the light came on again. With the same code! To keep this short, four mechanics, a visit to a district manager, two service managers, a head gasket replacement and almost six months in the shop and I decided enough is enough. I went to the general manager and was introduced to the newly promoted service manager. He asked me to give him a chance to fix this. I did not have a lot of hope but had no other option. He recommended an engine change. I was wary of that option but the engine he selected only had 65k miles as opposed to the 150k that was currently in my car.

The engine had a gash in the cylinder and was not worth fixing. He offered to do under warranty, which was just about to run out. They provided me with a loaner car. Over the six months I think I drove every model of vehicle Ford manufactured that year! When I drove the car after the engine swap it was running better. So the swap was the right choice. Now I have an engine that has only 65k miles instead of 150k miles and another one year warranty on the engine.

I was so grateful for the service manager, who is a man of integrity, that I made him a 1/24th scale dealership with his name to keep in his office as a name plaque.

He then chose a diecast model to place on the mini showroom floor. I told him that on those days that he feels like he isn’t making a difference to look at the diorama. On the inside wall, I put a picture of my car. He was overwhelmed. I just wanted to show him I appreciated what he did and he is making a difference. His name is Tyler Blevins at Joe Cooper Ford in Edmond, Oklahoma. I highly recommend him to everyone.

To begin this project I went to a local Ford dealership and took some really good photographs to use as reference. I then went shopping for the right frame to use as the base. I considered style and how the frame would function as the foundation of the building. The frame would also determine the exact size of the project.

I cut a piece of plywood to fit the grooves in the back where the picture was designed to go. Then I chose the colour for the flooring, I planned to make it with stained glass instead of many other options so the colour was all I needed to choose. Since this was going to be a car dealership I wanted to stay true to the brand. I cut two colours of stained glass in 1 1/4” squares. I glued the glass using contact cement to the white plywood (the glass has translucent and clear characteristics).

Basswood was used for the spacing between the glass so it could be grouted like a tile floor. Because I work in the sign industry, I had access to some really great materials to use in miniature. For the walls I used some scrap sheet 1/4” PVC, it is easy to cut with a utility knife or X-ACTO. I did use regular clear glass for the windows, however the frames are 1/16” clear acrylic covered in brushed silver adhesive backed vinyl (from the sign industry).

I cut out the windows on a machine that is basically a miniature CNC router. The iconic entrance is also thin acrylic covered with the silver vinyl. To achieve the panel effect, I scored straight lines with a ruler. To achieve the curve of that piece, I put it in the oven and when it was malleable I propped it up on one end as it cooled creating a beautiful curve to match the life-size version.

The Ford logo is simply a sign. Brushed silver vinyl reverse cut and applied to the back of clear acrylic that I cut out on the machine I mentioned earlier. Then I masked off the front and spray painted the blue on the back after the vinyl was applied.

Moving around to the side entrance is a service bay door so I could put a model on the showroom floor. The door is thin glass. I created a track system so that the bay door can open and close like the life-size bay door. I also used the silver vinyl on the door to simulate divided windows.

The lighting is 12v LED strip that can be cut at intervals by choice. I chose 1:24 scale so the owner could pick his choice of diecast or plastic model cars. For the sign of his name I used 1/8” blue acrylic cut out by laser. I painted the edges of the letters silver to give it the next level of detail and to match the life-size standard. 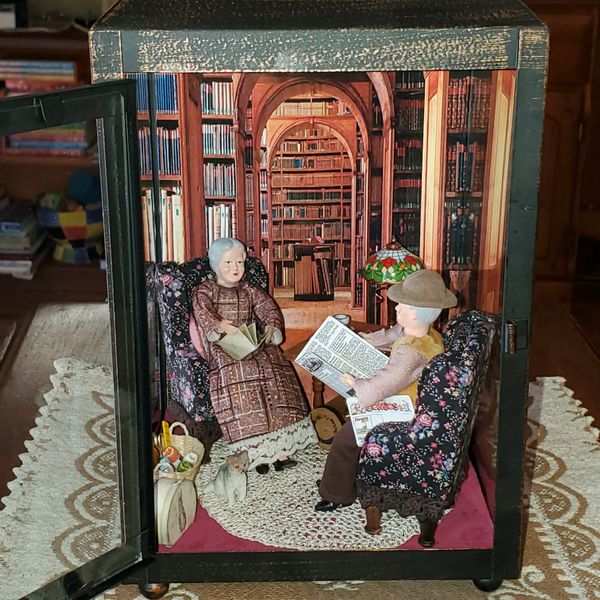 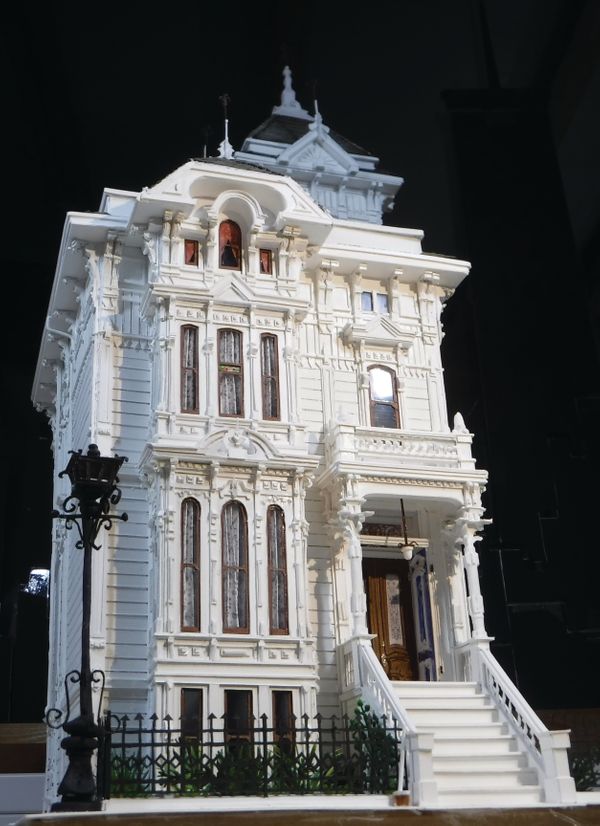