Her recent creation, Frankie’s Garage, has all of the character of that neighbourhood auto fix-it shop that often is seen in small towns. The Craftsman Cabin kit, featured in the Hobby Builders Supply’s 24th annual Creatin’ Contest, was the basis for her project, and her efforts won her a Second Place award.

“I was inspired by my youngest son, although he had no idea what I was going to do,” she said. “He owns an old truck that he loves and works on whenever he can. I found vehicles close to the right scale in a flea market, and that was the start of this project. I already had ordered the kit, unsure of what I was going to do with it. I decided to make it into a garage, using the trucks and cars I had found. Since the contest allowed any modifications, it was easy from there.”

With the contest kit as the basis, she added other materials, such as basswood, mat board, acrylic paints, corrugated craft paper for the roof, some 1/4 inch plywood, and two kitchen under-the-counter strips of LED lights. “I would say 70 percent was purchased, although I did make all the pieces my own by painting them, grunging them up, or taking them apart and using them in different areas of the scene. Nothing looks new, and that was my purpose. I made what I could - one of the workbenches, the toilet tank in the bathroom, the flooring, and many of the smaller items.

The interior walls I painted by dipping my fingers into five different colours of paint - cream, grey, ochre, black, and tan – and smearing them on. I lined the outside of the building with driftwood grey-stained panels, and battens of basswood, and I changed the pitch of the original small front roof, raising it at an angle so the viewer easily could see into the interior.

I also made a ramp for the vehicles to enter the garage, and rolled some tires in black paint to leave tread marks. The landscaping is diorama sand and plants. I printed a decal of the shop’s logo for the yellow delivery truck parked at the side of the building. I grunged up every object in the interior, including the concrete floor and walls.

I also put in two light strips, one under the small windows above the front raised roof and the other above them, where they would not be seen but would light up the interior. I put three windows and a skylight in the bathroom, because there was no light fixture installed. The roof is corrugated craft paper, painted grey, with red, brown, and terra-cotta paints to make it look rusty.

Several coats of watered-down acrylic black and grey paint were applied for the weathered look on the garage exterior, watered down and wiped off. I used black puff paint (for T-shirts) to simulate grease around the shop; it dries flat and shiny. All the posters on the walls were printed from the Internet, sized to scale. I then replaced the front wall panel with two swing-out doors that could be closed to keep dust out of the interior.”

She cites the dirty bathroom with its concrete floor as the most fun to create, saying. “I have to apologise to the guys about the bathroom. It is what most women think an auto shop’s bathroom would be like. The concrete floor was made from white craft glue and cornstarch, painted grey, then sealed with a water-based satin finish, and it took two tries to get it right. It took a while to figure out that I had put the paste/corn starch combination too thickly on the floor.

As it dried, it cracked, so I sealed it with satin water-based sealer, then put another thin layer over it. When it was thoroughly dry, I painted it grey, and sealed it once more before I grunged it up. This floor, with its realistic greasy effect, was the most challenging part. The walls for the bathroom are plywood, added to what had been an open porch, and mat board strips were used for its floor; I had to be careful when dirtying up the floor with paints not to let it get too wet, or the top paper layer would come off.

The bathroom fixtures were from a kit, but the toilet had no tank on it, so I cut the front off the footed bathtub and used that for  the tank top. I also used the plumbing pipes from the bathroom kit. I never know what my work is going to look like when I begin it, so I never am disappointed when it is done. It gradually becomes what it is.”

Frankie’s Garage will stay in Sandy’s family, as she explained. “I made it as a gift for my son. He is thrilled with it, and is happy it won a prize in the contest. He is going to display it as a cool conversation piece to show his friends.”

Her next project already is underway. “I will be adding to my Sherlock Holmes building. It was going to be a large room box, but has evolved into a three-story building. I have added a tobacco/news shop on the corner of the bottom floor. There are so many challenges to this project, like trying to make everything that is not available in miniature, and it is from a period with which I am not very familiar. Those Victorians had a lot of gadgets that are unknown today, especially the ones used by a detective like Sherlock Holmes. This work is my first experience with the Victorian era, and I am still researching it." 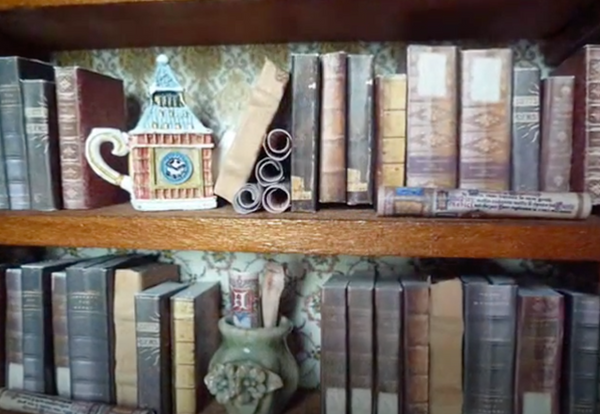 One miniaturist shows off her library of books.. and they all contain fascinating mini scenes